Would you like to know which animal you are born under and check out your astrological path according to Chinese Zodiac? Go on to get more!

A legend has it: long ago, the Chinese people found that it was very difficult for illiterates to remember and adopt the Heavenly Stems and Earthly Branches, so they asked the Jade Emperor for help. The Jade Emperor thought that animals influenced people a lot and had close relationships with people, so he decided to choose 12 animals to substitute for the 12 earthly branches. Jade Emperor fixed a day and notified all the animals on earth to come sign up, stating that the first 12 arrivals would be the lucky ones and named as Twelve Chinese Horoscopes.

Receiving the good news, all of the animals began to get ready. The cat and the rat were neighbors and good friends, and they decided to sign up together. The day before the fixed day, the cat said to the rat:'we have to get up early to sign up, but I've gotten into the habit of getting up late. What should I do?' The rat reassured him, patting his chest confidently:'don't worry; I will wake you to go together.' However, the next morning after getting up and having breakfast, the rat found that the cat was still asleep, so he went to sign up on his own, thinking:'I had better not wake the cat because he always walked faster than me.' On the way, the rat came across the ox that was again passed by the cunning rat, and the rat won the first position, followed by the straightforward ox, tiger, rabbit and other animals. When the cat had slept enough and hurried to the gathering place, the 12 animals had already been selected. After that, the cat was so angry that he hunted and ate the rat. 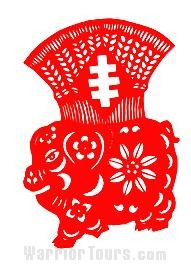 Meanwhile, people divided 24 hours of every day into 12 time periods according to the living characters of the animals:

Ox: 01:00 ~ 03:00 named Choushi, when oxen begin to crush the food, regurgitating to the mouth slowly and comfortably.

Rabbit: 05:00 ~ 07:00 named Maoshi, when the jade rabbit is busy pounding herbal medicine on the Moon according to the tale.

Horse: 11:00 ~ 13:00 named Wushi, when the sun is high above and other animals are lying down for a rest, while the horses are still standing. 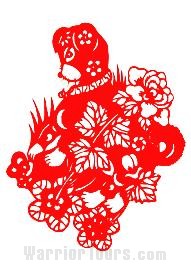 Moreover, the Chinese Zodiac is also part of people's religious belief in China. Chinese people divided the 12 animals into two categories of Yin and Yang (the underlying principles of Chinese philosophy and medicine), corresponding to the Five Elements (Metal, Wood, Water, Fire, and Earth), and then created a set of fortunetelling methods which proclaim that the twelve Chinese horoscope animals decide people's fates. As a result, the Chinese Zodiac began to connect with people's characters, friendship, love, marriage, career, health, fortune and so on. People thought that when a person came to the year of his attribute (decided by the year when he was born), he must wear a red belt to pursue good fortune and shun calamity. Even children had to wear a red vest and underpants in their birth year. This custom of 'Birth Year' is still popular throughout China.